An Escape From Escapism 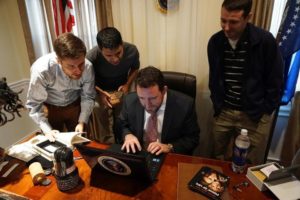 If videogames are an “escape from reality”, if Pokemon Go is an “augmented reality”, and if Occult Rift is a “virtual reality”, then escape rooms are just “reality”. Your gamemaster might give you an elaborate background story to set the stage, or it might be your job to figure it out yourself. Either way, there are no avatars, there is no lag, there are no cheat codes, and you can’t pause and save. There’s only you, your team, and your mission. Challenge escape rooms offers a tactile, immersive environment, with a time limit, a series of clues and puzzles, and a defined purpose. This incredibly popular experience attracts an equal number of men and women and people of all ages. This is remarkable because the gaming industry as a whole is overwhelmingly male and young. But escape rooms transcend gender and age stereotypes. It’s an activity that requires no background and no specific technical skills, and is therefore equally accessible to a male teenager or a middle-aged woman (what other forms of entertainment can make this claim?).

Escape rooms offer us a chance to become real-life detectives. They let us explore the unknown, and in the process they switch on the problem solving part of our brain like no other modern experience. Rather than telling us a story, escape rooms let us create it ourselves. When the door locks and the clock starts ticking, we cease to be observers or casual participants. We become the authors, the protagonists, and the heroes of the story.

In a time when people are attached to screens almost every waking hour, it’s no wonder that escape rooms have become popular worldwide. The escape room experience forces us to live in the present moment, and it is impossible to remain indifferent to it. An escape room is a curated treasure hunt that, in a way, offers an escape from escapism.

Can you escape the room in just 60 minutes?